My first CD album 64 was released 20 years ago

It being close to 20 years ago since I produced and released my debut CD album 64, I thought I should write a few words about that whole process. Technology has evolved so much during these 20 years. Even the thought of putting music on a piece of plastic seems a bit strange today..

I guess I got the idea of releasing my own CD when I met Norwegian composer and Amiga legend Bjorn Lynne while visiting The Gathering in Norway. He was selling his CDs at a table and I thought, hey I could do that as well: producing my own and market / sell it myself. I have tried for several years to get a record deal but to no avail. The cost of printing CD:s had gone down quite significantly in the mid 90s, especially if you hired a service outside of Sweden, like in Germany. I figured I could easily sell a few hundred copies to people who knew me from my days as a musician on the Commodore 64 and to other persons interested in the demo scene.

So I started to form a plan on how to get it done. I had a bunch of finished songs from around 90-93. They were all produced with the sequencer software Dr T on my Amiga 500 and a cheap Roland D-110 sound module. The music was recorded on a four track tape recorder, called a porta-studio. In the mid 90s I had bought some more synths and gear and wanted to use that to make my older tunes sound a bit less.. 80s and digital. Also the sound quality of porta-studio recordings wasn’t exactly CD-quality. I figured I would have to get hold of more hardware and re-record everything again.

In August 1996 I had saved up enough money to buy a decent PC. I got one with a good sound card, a Turtle Beach Tropez+ capable of recording one 16 bit stereo track at a time. I started to re-record all my old tracks and a few new ones made together with my friend Johan Lundin. I used the Amiga as a sequencer and recorded everything to the PC in one take, wet with effects and everything. On the PC I used Cooledit’95 for basic editing and SAW Plus for multi-track stuff and basic EQ. I didn’t really understand how a compressor worked at the time so I set the volume of all tracks individually, so they would fit together on the CD. 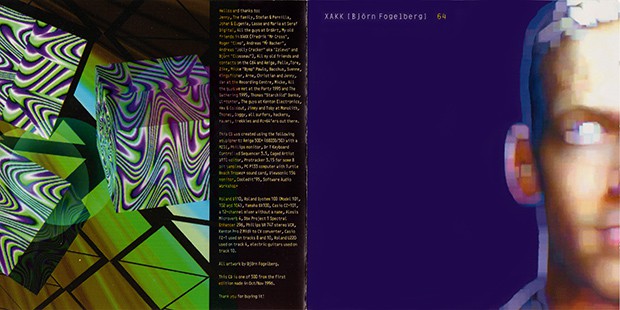 When all the tracks were finished I had to figure out how to burn everything to a CD-R that could be sent as a master to the printer in Germany. CD-burners cost A LOT back then so of course I didn’t own one. I found out about a local guy that had actually bought a burner and could make my original CD, for a price of course. Now came the problem of how to send him 650 megabytes of WAV files. In 1996 the internet was mainly accessed with modems in the range of 28 or 56 kbit/s. And of course USB sticks didn’t exist yet. Luckily we both lived in one of the first cities in Sweden with “broadband” speeds of (up to) 512 kbit/s and we were both connected to it. I set up an FTP server from which he would download the WAV-files.

When the CD master was burned it was time to make the artwork for the CD and jewel case. I worked as a printer at the time and had pretty good knowledge of what needed to be done. I think I used Corel Draw for the design. Photos and computer graphics were done on the Amiga, imported to PC and then put through some filters in Photoshop. The cover had the left side of my face, heavily blurred and the back had my right side, put through some trippy filter. If you put them next to each other you will see the whole of my face. 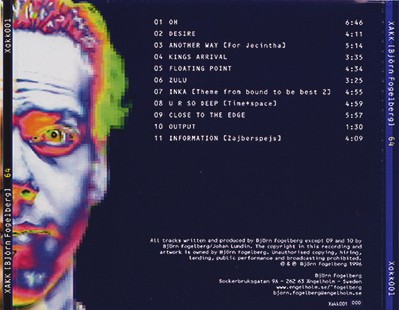 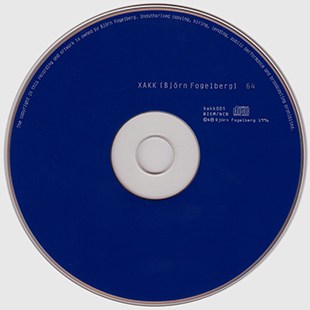 I pondered sending the finished EPS-files with the cover design on a diskette to the printers in Germany but it was actually cheaper for me to make my own CMYK-films for print and send them. A local company helped me with that and since I knew them through my work it didn’t cost me that much.

64 was printed in November 1996. Early on I had decided to only make a few hundred copies of it. Mainly because it was a niche CD and I didn’t think I could sell more than 200. Turns out I had to print at least 500 copies since that was the minimum the printers would do. Also turns out I was right. I still have around 200-250 copies of 64 left in my closet. The rest of them I sold myself at various computer parties, on BBSes and on the internet.

So that was the story about how I produced my own physical CD, then marketed and sold it on the net in 1996-1997. Let me know on my Facebook page if you have any questions.

Edit: I found my old article “How to make a CD” on Waybackmachine. It’s in Swedish and super detailed on the whole process of recording and printing CD in 1996. Could be fun to read if you are interested in the trials and tribulations of a home studio music producer in the 90s.